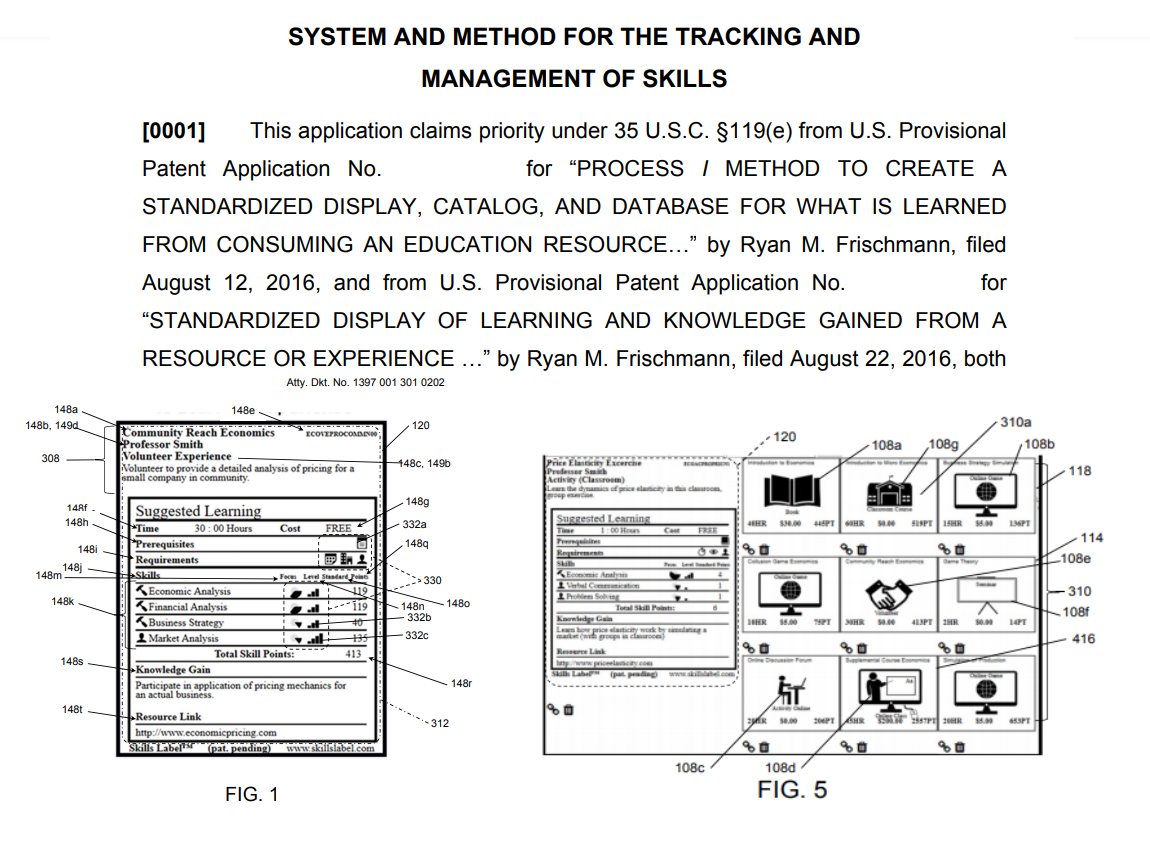 In early 2015, I first thought of the learning labels process – a system to manage and track skills. Originally, the primary purpose of the application was to reduce data entry in a tasking application; once a label is created, the same learning definition could be used everywhere.

Fairly quickly I realized I thought of an innovative framework and decided not to officially announce the technology until I applied for a patent. By mid-2016 I designed and coded the prototype. Later in the year, I did a prior arts search and formally applied for two provisional patent applications.

I continued advancing the features and functionality of the system. In the summer of 2017, I worked with the Law and Business School of Syracuse University. They wrote a paper advising me on next moves and the value of the intellectual property; they also conducted their own prior arts search (without revealing any clear matches). This is a link to their article: A System and Method for Tracking and Managing Skills: TCLC Helps a Rochester Entrepreneur Protect a Bright Idea. Soon afterwards, I worked with a legal team to submit a non-provisional patent. This is a link: complete patent application.

The USPTO confirmed receiving the application right away. In December 2019, they began formally reviewing the patent application. I am currently waiting for their final response. Personally, I see no reason why the patent decision would not be favorable; the system is clearly novel and valuable.

In the intervening years, I added significant new functionality to the system: particularly connecting job elements and creating learning pathways. I worked with several universities to formally test the system. One former professor said: “Working in education for 10+ years. Congratulations on an original idea”. I also wrote a book documenting the concept, current functionality, and future vision and research: Learning Labels - A System to Manage and Track Skills: Map Learning in Skills. Map Jobs in Skills. Combine to Create Pathways.

So, why did I apply for the patent?

As said previously, I knew the application was original and valuable – without question other companies were going to compete with many of the key themes. I was right. For example, there are a few companies developing algorithms for quantifying numerical learning gains. The Skill Points ® algorithm is stated in the patent application. This unequivocally proves the relevancy and value of this feature within the learning labels system. Wanted to protect a good idea.

Trying to set a standard in how we represent learning expectations and job requirements, which necessitates partnering with learning institutions and software platforms. This is a post on how partnering might work. A patent at least gives me (my team) a chance to work with them. In speaking with one such organization, after explaining how the system works, a director of an LMS organization said: “This is great! Ryan, to be honest. This is something we might try to do in house.” My response: “I’d like to work with you. That is why I got the patent.” Wanted some leverage in forming partnerships.

The majority of recent patents in learning and skills are by a team of researchers at large reputable companies (like Google, Apple, and Microsoft); many of them were expedited (where you pay more to speed the USPTO review process). I personally completed all the work in building the system (thousands of hours and five plus years), wrote the patent applications (lawyer edited the last one), and funded the submission process. A patent is the only way for me (my team) to compete with huge well-established software companies. Wanted a chance to get a return for me and my team.